Our July 20-24 reunion, hosted by Gary and Reiko Glanert, with help from Tom and Lori Osmond, was held in Ann Arbor, Michigan at the Kensington Court Hotel. Ann Arbor is the county seat of Washtenaw County, and 2005 is the 50th anniversary of the naming of USS Washtenaw County. There were 22 crew members in attendance this year, plus wives and family members, and Larry and Erik Martin. The ship and crew were honored with letters of commendation and congratulations from the Washtenaw County Board of Commissioners, Michigan Governor Jennifer Granholm, Congressman John Dingell, US Senator Debbie Stabenow and US Senator Carl Levin. A journalist and photographer from The Ann Arbor News interviewed crew members for a story, which appeared in the Friday edition.

As has been traditional, this year's reunion included a hospitality room for the display of personal memorabilia, presentation of slides and photos, and the telling of sea and war stories. Also on display was the display case of USS Washtenaw artifacts formerly displayed at the courthouse, but now kept in storage. Items included the ship's ribbon bar, after steering wheel, commissioning plaque, ship's bell, and a model created by Commander W.G. Prince. Missing from the display case was the helm, which could not be found in the warehouse.

Entertainment included a dinner cruise and play aboard the Detroit Princess Riverboat Thursday evening, and a banquet dinner and music at the hotel Saturday evening. Many took side trips to the Ann Arbor Art Fair, local casino's, and Henry Ford Museum/Greenfield Village in Dearborn. Some attended baseball games in Detroit, or saw the comedy titled "And The Winner Is" at the Purple Rose Theatre Saturday afternoon.

This year two former Washtenaw commanding officer's were in attendance. Al Dillon served as the ship's captain from 1966 to 1968, and was relieved by Jim Burpo who served as CO from 1968 to 1969. Both had plenty of sea stories to tell! Al has taken a great interest in seeing Washtenaw turned into a memorial museum, and brought along posters created by his wife, Alice, to further fund raising efforts. He gave an emotional presentation at the banquet dinner, followed by acceptance of a letter of congratulations presented by Wesley Prater, Chairman of the Washtenaw County Board of Commissioners.

A crew members' meeting was held Saturday to talk about next year's reunion, and the USS Washtenaw County Veterans Association was voted into existence to handle reunions in the future. Al Dillon was elected President, David Vicknair Vice President, Jim Hopkins Treasurer, and Tom Osmond will serve as Second Vice President, all for two year terms. Greg Pierceall was voted honorary historian and Bob Coombs web master. Annual dues will be $25 to be used for reunion expenses. Jay Brown could not be in attendance, but had previously agreed to head up our 2006 reunion. It was decided that a poll would be conducted to ascertain the popularity of the next reunion being held aboard a cruise ship, or another destination, with Las Vegas and San Diego being mentioned.

Thank you Gary, Reiko, Tom and Lori, for a great reunion in Ann Arbor! And thank you Jay Brown for making a $25 donation, even though you could not attend. 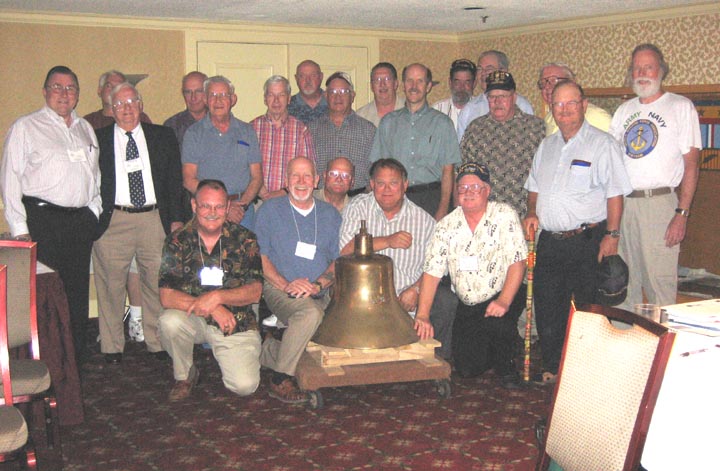